What are the first signs and symptoms of Lyme disease?

In the first early localized stage of Lyme disease the skin at the site of the tick bite becomes infected with Borrelia burgdorferi bacteria which can cause an expanding round or oval red skin lesion called erythema migrans. This may or may not be associated with flu-like symptoms within days to a month after the tick bite such as achiness, chills, fever, sweats, fatigue, malaise, headache, stiff neck, muscle soreness, joint pain, swollen lymph nodes, and sore throat. The combination of the skin lesion and flu-like symptoms are the primary manifestations of acute stage Lyme disease. Acute Lyme disease is not associated with typical cold-like symptoms of runny nose, prominent cough, or prominent diarrhea.

It is important to understand that a rash is not always present or easily recognizable in early Lyme disease, and this can lead to delayed diagnosis and treatment.

It is wise to take a picture of the rash with the date for your medical record, since a rash compatible with erythema migrans rash should prompt urgent evaluation and treatment. Lyme disease is most successfully treated in this first stage.

Bitten by a tick and have a rash?

If you have a suspicious rash or your symptoms persist, please seek medical care immediately.

The incubation period from tick bite to rash is usually 3-10 days but can be 30 days.

The Lyme rash can spread through the bloodstream to other areas of the skin.

Sometimes blisters develop in the center of the Lyme disease rash.

Know What to Do When Bitten By a Tick

What are the second stage signs and symptoms of Lyme disease?

The symptoms of second stage, early disseminated, Lyme disease can be difficult to attribute. Symptoms include severe fatigue, fever, pain, intermittent weakness and achiness of the muscles and joints, numbness in arms and legs, vision changes, and cognitive dysfunction such as short-term memory difficulties and problems multitasking. These symptoms are not specific for Lyme disease and can make the diagnosis of second stage Lyme disease very challenging.

What are signs and symptoms of the third stage of Lyme Disease?

Late stage Lyme disease can result when treatment is unsuccessful or started too late due to unrecognized symptoms or misdiagnosis. The late disseminated stage occurs months or years after initial infection and can have a major impact on a patient’s health and quality of life. Late Lyme arthritis is a third stage Lyme disease manifestation that involves fluid accumulation and pain in joints, particularly in the knee joints. Late neurologic disease is a 3rd stage condition that can also be debilitating and difficult to diagnose. Late disseminated Lyme disease symptoms include a variety of symptoms that are often neurologic in origin including: numbness in extremities, mental fogginess and concentration problems, and difficulty following conversations or processing information.

When should I go see my doctor?

Anyone who has been bitten by a black-legged deer tick is at risk for Lyme disease. The highest risk groups include those living in or visiting endemic areas, especially people who spend significant time outdoors such as gardeners, hikers, or outdoor workers.

Patients should seek advice from their doctor if they have a suspicious round expanding red skin lesion, and/or show signs of summer-flu, particularly during Lyme disease season, which is highest-risk late spring through July/August. If those circumstances apply (rash, summer-flu) or symptoms persist it is very important to go to a physician.

For the west coast and other more temperate regions Lyme disease can be a year-round concern.

In the later disseminated stages, Lyme disease can be a much more insidious and complex illness. An individual should seek medical care if experiencing symptoms such as prolonged fevers, unexplained fatigue, painful joints, new or unusual headache, or heart or neurologic symptoms. If unexplained viral-like symptoms last for more than 1-2 weeks, please seek the advice of a physician.

IF YOU ARE DEPRESSED OR HAVE SUICIDAL TENDENCIES

Join our mailing list to receive the latest news and updates from Johns Hopkins Rheumatology and the Johns Hopkins Lyme Disease Research Center.

You have Successfully Subscribed! 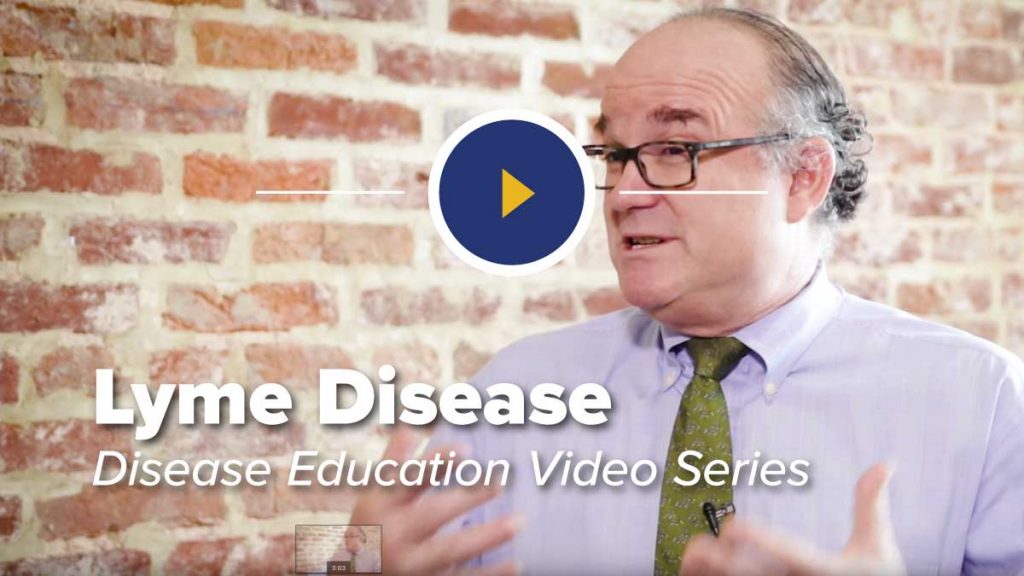